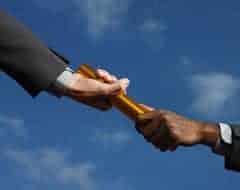 Have you considered your succession plan?

Succession is a sleeping giant that is about to awake and which many business owners do not even recognise will impact them directly.

Throughout the GFC many business owners who had not previously had a succession plan came unstuck as their industries changed and their businesses did not change fast enough to keep up with the times. It is now more than ever important that all businesses have a succession plan whether it is to be enacted now or 10-20 years’ time.

In 2020, the baby boomers generation (those born between 1946 and 1964) will be aged between 56 and 74 years of age, with the weighting heavily towards the older end of the scale. The outcome will most likely be that by 2020 a significant number of baby boomers will have or will be in the process of transferring ownership of their business.

The next 7-10 years represents a period of opportunity and risk. Opportunity will lie in:

• moving ahead of the bottleneck that may arise if many businesses try to exit at the same time;

• planning and acting in your succession now, and

• looking for opportunities to acquire, merge or form alliances with other businesses with a strategy of either growing to exit or growing to stay and improve competitiveness.

Risk lies in complacency and inaction, resulting in either missing opportunities or simply being left behind.

The challenge for business owners is to understand that succession does not necessarily mean that you have to retire. As a population we are living longer and longer so as such our working lives are increasing. It is important though that plans are made so that there is a choice ie. A builder may not be able to be fulltime on the tools at 70 however; he could manage the business and still be involved if the right plans are implemented.

My challenge for business owners is that they start today with goals for what they want later in life, so that working with their accountant they can set up plans for the future.